The Memorial Day holiday is considered the unofficial start of summer. But the holiday that really jumps starts the season is the Fourth of July. Although the premier event for fireworks will be in San Francisco, there will be several fireworks display all across the Bay Area to celebrate Independence Day, including the North Bay. Along with the colorful parades, barbecues and a host of live music artists, here are five of the best places in the North Bay to watch an amazing fireworks show on the Fourth of July.

Celebrating its 75th year, the Marin County Fair will host an amazing fireworks show every night of the fair. Beginning at 9:30 p.m., fireworks will be launched from three barges resting upon the waters of Lagoon Park adjacent to the fairgrounds and will be accompanied with popular music for the entire family to enjoy. Each of the nightly displays are expected to last approximately 15 minutes and pyrotechnics like rockets, Roman candles, cascades, comets and meteoric shows will all help light up the night sky. First held in 1925, the Marin County Fair will have plenty of food and beverages available, carnival rides and live entertainment, including big name acts like The Wallflowers, Kool and the Gang and Sheila E. On the Fourth of July, the classic rock band Foreigner will perform on the final evening of the county fair, followed by the fireworks show.

Related: Best Places For Horseback Riding In The North Bay 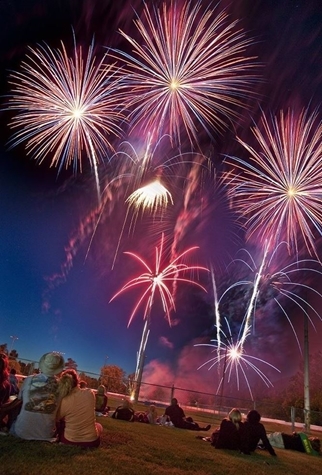 The fireworks show at the Napa County Fair is the grand finale in a day full of family-friendly events on the Fourth of July. The festivities start in downtown Calistoga with the annual Fourth of July parade beginning at 11 a.m. Following the event, which will feature marching bands, floats and horses, the county fair will be set to open at noon. General admission to the fair includes carnival rides, live entertainment and a fireworks spectacular beginning at 9:30 p.m. Although parking will be available at the county fair, it’s just a 10-minute walk from downtown Calistoga, with plenty of shops and restaurants open for business, including Calistoga Wine Stop and the newly opened Johnny’s Restaurant and Bar.

The City of Napa will host two up-and-coming bands and a fireworks show at Veterans Park to cap a fun-filled day of Fourth of July activities. The Napa Sunrise Rotary 4th of July Parade kicks off festivities in this city known as the gateway to the Napa Valley wine country and will feature marching bands, horse, colorful floats, street performers and more. Following the parade, a Kid’s Zone will be open all day at Oxbow Commons just east of the Napa Valley Opera House. Entertainment at Veterans Memorial Park will begin at 5:30 p.m. with Bay Area-based Panic is Perfect followed by the LA-based alternative rock band Mowgli’s. Almost immediately after the live concert, the fireworks, which will be launched at the park overlooking the scenic Napa River, will close out the evening. Event organizers say the best places to watch the fireworks will be at Veterans Park, Oxbow Commons and other parts of downtown Napa.

Voted the best fireworks show in Sonoma County, the Santa Rosa Red, White & BOOM is expected to be one of the largest Independence Day celebrations in the North Bay. Held at the Sonoma County Fairgrounds, the annual family-friendly event will offer several food vendors, activities for kids and live music and entertainment from local artists. Gates will open at 3:30 p.m. and country western singer McKenna Faith will kick off the entertainment program at 4:00 p.m. The event will be hosted by local radio personality Brent Farris of KZST and Santa Rosa’s popular rock band Kingsborough, and the party cover band Wonder Bread 5 will also perform live. Preceding the fireworks, said to be the largest in Sonoma County, will be a guest star on hand to sing the Star Spangled Banner.

A fireworks spectacular accompanied by the award-winning Santa Rosa Symphony will be held at Weill Hall + Lawn on the Sonoma State University campus. Led by conductor Steve Berkowitz, the Santa Rosa Symphony will perform popular classics from the American Songbook and will be be accompanied by the Grammy Award-winning producer and music artist Steve Tyrell. Gates and the Kids Zone will open at 4:30 p.m. and the venue offers indoor seating, outdoor table seating and lawn seating. Weill Hall + Lawn is a state-of-the-art facility featuring a 1,400 seat concert hall whose back wall can be fully opened  onto the beautiful Weill Lawn. Established in 1928, the Santa Rosa Symphony is one of the oldest symphony orchestras in the western states and is the resident orchestra of the Green Music Center at Sonoma State University.

Related: 5 Things In The Bay Area That Exist Nowhere Else In The U.S.
Randy Yagi is an award-winning freelance writer covering all things San Francisco. In 2012, he received a Media Fellowship from Stanford University. His work can be found on Examiner.com