MELBOURNE, AUSTRALIA - JULY 11: Lucy Durack performs as Glinda, the Good Witch and Amanda Harrison performs as Elphaba, the Wicked Witch during a photo call for "Wicked" at the Regent on July 11, 2008 in Melbourne, Australia. (Photo by Kristian Dowling/Getty Images)

Summer is in full swing. These August events and festivals in the Bay Area are some of the ones you can’t miss out on. As diverse as the San Francisco Bay Area is, it may be a bit overwhelming on the amount of events there is in just one month. Thankfully, we shortened the long list down to these local and popular events. From Oakland’s Art & Soul Festival to Outside Lands inside San Francisco’s Golden Gate Park, this list is sure to have an event for everyone. Which one is yours?

It may be held on a rugged, rural ranch but the Bodega Seafood, Art & Wine Festival is no country bumpkin event. On August 23rd and 24th in the sleepy little burg of Bodega, this 20 year old festival opens its gates and offers up a truly unique venue with exceptional quality throughout, making it one of the premier art, wine and food festivals in California. Over a dozen catering companies offer a bounty of seafood dishes and other edibles. Barbecued oysters, crab cakes, Key Lime calamari, fish tacos, albacore wrapped in bacon, grilled salmon, fish and chips, and swordfish souvlaki, to name just a few delicious items, are all offered up, plus lots of new and yummy edibles. Saturday night August 23rd, the festival will have its first ever night concert! Featuring blues legend Robben Ford!

So Much Happened Before Dorothy Dropped In. Long before that girl from Kansas arrives in Munchkinland, two girls meet in the Land of Oz. One – born with emerald green skin- is smart, and fiery and misunderstood. The other is beautiful, ambitious, and very popular. How these two grow up to become the Wicked Witch of the West and Glinda the Good makes for “the most complete- and completely satisfying – new musical in a long time.” (USA Today) On Broadway and around the world, WICKED has worked its magic on critics and audiences alike. Winner of 50 major awards, including a Grammy and three Tony Awards. More than 270 award-winning artists from around the country and some 30,000 patrons flock to the waterfront village of Sausalito, California, on Labor Day weekend each year for the annual Sausalito Art Festival. One of the oldest, most prestigious and most anticipated open-air art events in the country—the Sausalito Art Festival has set the standard for quality, variety, innovation and scope of artistry for more than 60 years.

Dubbed by The New York Times as Comedy’s “Lovable Queen of Mean,” Lisa Lampanelli is a no-holds-barred insult comic who masterfully works her audience while maintaining an inherent likeability that ultimately wins the hearts of her fans. Hailed as a cross between Don Rickles, Archie Bunker, and a vial of estrogen, she has even won accolades from The King of All Media, Howard Stern, who describes her as “a real funny broad.” With nearly 400,000 guests, the annual Fremont Festival of the Arts is California’s premier art, music, and fun fest. The largest free outdoor festival west of the Mississippi, the festival covers more than four walking miles that showcases the work of 700 artisans, 30 food booths, 8 fine wine and specialty beer booths, the interactive Kid City, and 2 professional sound stages. It’s free, it’s fun, and it’s for the whole family! The 2014 Festival will take place from August 2nd-August 3rd. 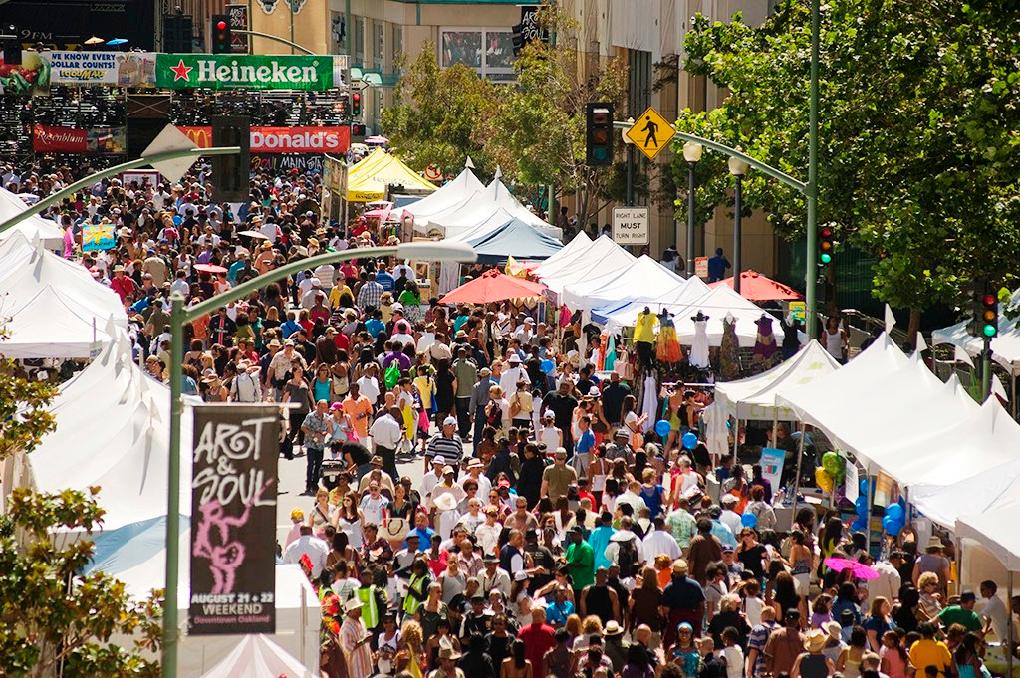 Art + Soul Oakland, the City of Oakland’s flagship festival that launched downtown’s cultural and economic renaissance, heats up with the inaugural Oaktown Throwdown BBQ competition on Saturday, August 2. Professional pit masters from all over California and backyard teams drawn from the local community will show off their skills while competing for cash prizes. The public will be invited to view the action up close and if desired, sample and then vote for their favorite fare (additional sampling fee will apply). In a perfect pairing, the Bay Area Blues Society continues its annual Art + Soul tradition with a rousing showcase featuring veteran Oakland blues artists and Bay Area blues legend Tommy Castro and The Painkillers.

Asian-Pacific American festival that features traditional and non-traditional performances, art, music and more – Sample yummy foods from Asian Pacific Countries as well as San Francisco favorites – Two stages with live music all weekend long including everything from jazz to rock – Bring along the kids for Asian inspired crafts and other fun games.

The Outside Lands Music & Arts Festival takes place in August with dozens of bands and attractions. From singer-songwriters to DJs, jazz acts and cutting edge rock bands, all major music movements are celebrated alongside a host of local musicians, food vendors and visual artists representing San Francisco’s vibrant cultural community.

Experience the best of Filipino art, dance, music and food at the 21st Annual Pistahan Parade and Festival. Billed as the largest celebration of Filipino Americans in the U.S., the the two-day event organized by the Filipino American Arts Exposition is expected to draw over 60,000 people each day. Admission is free and fun for the entire family!

In the nearly twenty years since his professional career began, Justin Timberlake has been known as an extremely talented actor, dancer, and pop singer. He’s become an icon in today’s society and his movies, albums, and tour dates have made him one of the US’s most prominent celebrities. Both during his career with acclaimed boy band N’Sync and in his solo career, Timberlake has released six platinum albums and won as many Grammy Awards.

Arrive early and make it an entire day of FUN N’ DA SUN with rides, attractions, scavenger hunt, pool party, talent showcase, artists’ meet & greets, and more!!
The Redwood Amphitheater gates open at 6pm. And it will feature performances by some of your favorite 99.7 [NOW!] artists: Cher Lloyd – MAGIC! – Kalin & Myles — Becky G. And others to be announced. Paul McCartney: Those who don’t know the name of Sir James Paul McCartney must have been living on a different planet for the past fifty years. He has reached astronomical fame as a member of the Beatles, Wings, and for his hugely successful solo career. He holds the official title as most commercially successful popular music songwriter in the history of all music and has displayed that talent on diamond albums and sold-out tours. Despite his superstardom, McCartney is still touring with his “Out There” tour.

This main event in Monterey Classic Car Week is a great way to see vintage sport cars in action at one of the best, most spectator-friendly race courses in America. You can avoid the crowds and much of the costs by attending the pre-reunion weekend races rather than the reunion event itself. (photo credit: Bob Heathcote/mazdaraceway.com)

WWE Live “SummerSlam Heatwave Tour” presented by the WWE VIP Experience will burn through San Jose’s SAP Center on Saturday, August 16th. This will be the final Bay Area WWE show prior to Wresltemania 31! WWE Hall of Famers Hulk Hogan and Ric Flair are set to host one night of intense live event action as WWE World Heavyweight Champion John Cena and Kane will battle in a Street Fight. Plus “The Viper”Randy Orton will take on Roman Reigns and Dean Ambrose is scheduled to throw down with “Money in the Bank Winner” Seth Rollins. PLUS: Chris Jericho, Bray Wyatt and the Wyatt Family, RVD, Cesaro, Dolph Ziggler, Adam Rose, Big E, the WWE Divas plus many more of your favorite WWE Superstars and Divas.

On Saturday, August 16th, La Cocina will be hosting the 6th Annual Street Food Festival in San Francisco’s Mission District with over 80 local vendors to celebrate food entrepreneurs in the Bay.

See 200 of the “best of the best”collector cars and motorcycles in the world at the “best finishing hole”in golf. The culmination of an entire week of events for automobile connoisseurs. As shown above, besides old collector classics … new concept cars are also shown at Pebble Beach.