BURBANK (THE CW) – Revamped and ready, the hit improv show “Whose Line Is It Anyway?” returns to television on The CW, as announced by network President, Mark Pedowitz.

Featuring the return of Ryan Stiles, Colin Mochrie and Wayne Brady. Minus Drew Carey, this time around San Francisco-born comedienne and co-host of CBS’ “The Talk,” Aisha Tyler makes her debut as mistress of ceremonies. 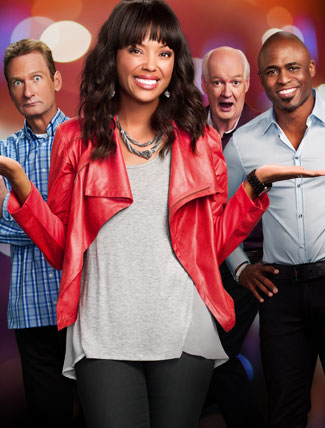 Cast of “Whose Line Is It Anyway?”

Hosted by comedian Aisha Tyler, “Whose Line Is It Anyway?” will also feature the return of cast members Ryan Stiles, Wayne Brady and Colin Mochrie, who along with a special guest each episode, must put their comedic skills to the test through a series of spontaneous improv games, prompted only by random ideas supplied by the studio audience. Based on the wildly successful U.K. format, which also spawned a previous incarnation in the US that ran for eight seasons on ABC, “Whose Line Is It Anyway?” is executive produced by Dan Patterson, Mark Leveson, Jimmy Mulville, Ryan Stiles and Wayne Brady. Co-created by Dan Patterson and Mark Leveson, “Whose Line Is It Anyway?” is from Angst Productions and Hat Trick Productions.

MORE NEWS: Azie Tesfai On Becoming The First Actor To Write An Episode For 'Supergirl': 'It's Incredibly Personal'

(Copyright 2013 by KBCW | CBS San Francisco. All Rights Reserved. This material may not be published, broadcast, rewritten, or redistributed.)